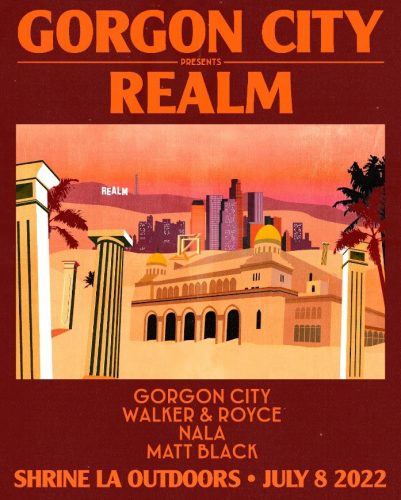 Powerhouse North London duo Gorgon City have announced the supporting artists for the Los Angeles stop of their acclaimed REALM show. When the UK dance innovators take the stage on July 8 at the iconic Shrine LA (Outdoors), they’ll be joined by a technicolor array of talent: Walker & Royce, Nala, and Matt Black. The news follows the pair’s massive, sold-out REALM gig this month at the Brooklyn Mirage. Tickets for REALM Los Angeles are on sale HERE.

REALM Los Angeles will treat fans to sets from some of the scene’s best-established and rising talent. Duo Walker & Royce have released their funky and off-kilter tech house for the likes of Dirtybird, Crosstown Rebels, Relief Records, and their own Rules Don’t Apply label; while Nala has been hailed as an up-and-comer to watch with her incendiary takes on house music, indie dance, breaks, and beyond for Dirtybird and Pets Recordings. Hometown hero Matt Black has been holding the city down for over a decade with his genre-hopping DJ sets.